4. "POYEKHALI!" The First Man in Space

As we move into the area commemorating manned Space flight, there is a splendid film showing early examples of Cosmonaut training, including what looks like cross-country running in just swimming trunks and trainers; diving and jumping off the high board into a swimming pool; and Cosmonauts being whirled round in a centrifuge.

Alongside the screen is an ejector seat, complete with dummy dressed in the sort of orange jumpsuit and white helmet which Yury Gagarin wore for his flight on 12 April 1961. Many visitors were unaware that the first six Cosmonauts – from Gagarin in Vostok-1 to Valentina Tereshkova in Vostok-6 – had to eject from the capsule after re-entry into the Earth’s atmosphere, because had they not done so the force with which the capsule hit the ground would have killed them. So at 7km above the ground the hatch flew open and the ejector seat was catapulted out. The Cosmonaut was then in free-fall for 3km, before in another pre-programmed move he or she was separated from the seat, the parachutes on both Cosmonaut and seat opened and they drifted down to Earth. For us mere mortals, that sounds like a terrifying experience. 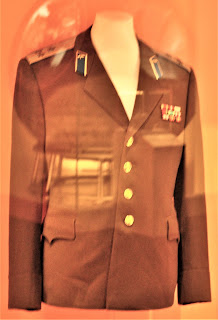 Turning right, we come to a veritable wall of memorabilia commemorating the first manned Space flight, by Yury Gagarin. His pilot’s mask and military tunic bearing the stars of a colonel (left), deliberately point up the empty space left by Gagarin’s sudden death in 1968 when the jet he was testing crashed. But then the medical student’s white coat painted with the words “КОСМОС НАШ!” (Space is Ours! - Below, right), actually worn by a student on Red Square to see Gagarin presented to the Russian people; and the mementoes of his visit to Britain in July 1961, remind us that he was very much alive and very much a hero in the wake of his flight. 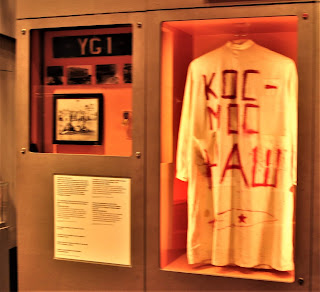 Britain was the first foreign country to which Gagarin travelled after his historic mission into Space; and the invitation came not from the British Government, but from the Amalgamated Union of Foundry Workers, recalling that Gagarin had worked briefly as a steel worker before he became a test pilot and then Cosmonaut. The solid-gold medal the Union presented to Gagarin as an honorary member of the Union is on display. However, as one of the photographs shows, below the “YG 1” number plate from the Rolls Royce in which he was transported while in England, so great was the welcome for the World’s first Spaceman that the Prime Minister, Harold MacMillan, was persuaded to meet him.

And the introductions didn’t stop there. Gagarin was taken to Buckingham Palace to have dinner with the Queen and Prince Philip. A signed and framed photo of the Royal Family at Balmoral which is displayed was presented to Gagarin as a souvenir of his visit to the Palace. It now bears on each end the stamp of the Mir Space Station, having been taken there in 1991 by Helen Sharman, Britain’s first Cosmonaut.

Another example of how the symposium on 5 February added to the Cosmonaut Experience was the snippets of colourful information provided by Slava Gerovitch in his talk, Cosmonauts inside a Propaganda Machine. Gagarin, Gerovitch revealed, was shocked by the public reaction to his Spaceflight. He was amazed at the genuine outpouring of joy and emotion which led hundreds of thousands to flood onto the streets of Moscow when he returned to the capital.

The Soviet authorities were shocked, too. For them, words such as “spontaneous” or “initiative” were dangerous; “spontaneous demonstrations” involved each factory and place of work providing a specific number of people to take part in a parade or to line the route. They carried carefully produced flags and banners displaying the Communist Party’s approved messages. Thousands of people pouring onto the streets in a genuinely spontaneous show of emotion, with home-made slogans such as the “Space is Ours” lab coat described above, made the authorities very nervous. Fortunately for them, the population of Moscow in 1961 was still politically naïve and living in the shadow of Joseph Stalin, so it was highly unlikely that such a public demonstration would have become the sort of political protest which was to happen in the late 1980’s and was to culminate in the collapse of the USSR.

Not only was Gagarin not prepared for such a demonstration, he was also unprepared for being thrust into the public eye as he was. Even though many people commented – and continue to comment today – on Gagarin’s handsome face, warm smile and relaxed attitude which, for example, saw him shakes hands with the British policemen accompanying his cavalcade in London, he was not a natural public speaker. Why should he be? Even though he was used to working as part of a team, both as a test pilot and a Cosmonaut, when it came to the sharp end of the job he was on his own, both in a cockpit and in the Vostok-1 capsule. So he did not feel comfortable being forced to stand up and speak in front of an audience or, even worse, being asked questions at a press conference.

And even if Gagarin was regarded by many as a super-man, Gerovitch revealed that he was also…a man. If you examine photos of Gagarin taken a while after his Spaceflight, (such as the one on the right) you can see that his left eyebrow has a kink in it, rather like an upside-down “v”. This is due to an accident he suffered when he jumped off a balcony whilst visiting someone else’s wife. When he fell, he broke a facial bone and was left with a scar going through his left eyebrow and up his forehead. The scar was airbrushed out in official photos, but the kink in the eyebrow remained.

A photo of Gagarin on the bus to the rocket hints at a more tragic tale, too. For years, the figure standing behind him on the bus was deliberately blurred to conceal his identity. The doctoring of photos was often practised in the Soviet Union to remove individuals who had become political outcasts or alter moments in history (very much a la George Orwell’s novel, 1984). In 1981, while researching his book, Red Star in Orbit, an American writer, James Oberg, came across an example of this which gave a vital clue as to the identity of the blurred figure. Oberg published two versions of a photograph from May 1961 taken in Sochi. It was of the leading Cosmonauts from the first group, and in the original photo there were six Cosmonauts. In a later version, which he published below the original, there were only five. It was to transpire that the man missing from the second photograph was the same one who had been standing behind Gagarin in the photo on the bus to the rocket. This was Grigory Nelyubov.

Nelyubov had been a candidate for the first Spaceflight, but when he wasn’t granted that honour he was still expected to be the third or fourth to go into Space. This all changed after he and two other Cosmonaut trainees, Ivan Anikeyev and Valentin Filyatev, were returning to Star City from a weekend away and, possibly drunk, got into a fight with security officials at the local train station. When it was discovered who they were, the officials were prepared to ignore the incident; but one officer insisted that the three Cosmonauts apologise. Anikeyev and Filyatev agreed to do this; but Nelyubov, who had a reputation for arrogance, refused; he, after all, was a Cosmonaut, why should he have to demean himself with an apology?

When word got back to the Cosmonaut Corp Commander, Nikolai Kamanin, all three men were expelled from the Cosmonauts programme. The other Cosmonauts on the programme were appalled that Nelyubov had taken two others down with him. Nelyubov was sent back to Vladivostok as a fighter pilot. Few of those around him there believed his boasts that he had been a Cosmonaut-in-training. He became increasingly isolated, and to add to his misery he watched as the other Cosmonauts he had trained with – and then more junior ones – flew in Space. Depression and alcoholism took an ever-firmer grip on him; and in the early hours of 18 February 1966, he fell – or jumped – under a train and was killed. The first that was revealed about this tragic story came only 20 years later, in an article by a Russian journalist, Yaroslav Golovanov. In April 1986, in a series of articles he wrote to mark the twenty-fifth anniversary of Gagarin’s flight, Golovanov told Nelyubov’s story. Mikhail Gorbachev’s policy of glasnost – openness – was beginning to bear fruit.