Follow the country folk toward home at night, in the railroad stations, and you see what Russians call the narod, the masses, of whom officialdom and intellectuals privately speak with condescension or contempt. They are coarse, raw, simple people, weatherbeaten as the log cabins in which they live, hardy and enduring as Maine fishermen, toughened by a lifetime of battling the elements.
(Smith, The Russians, p.250; 1977) 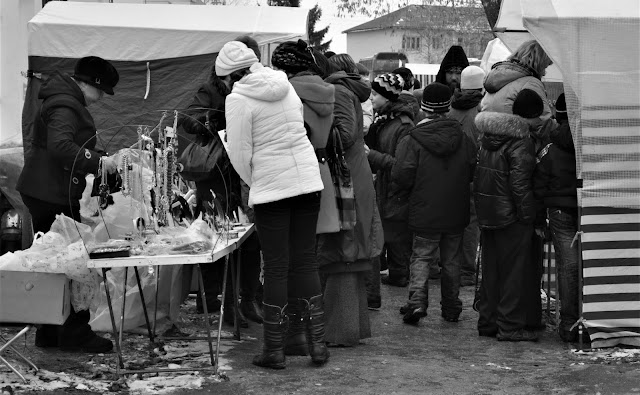 By territory, Russia is the biggest country in the world, as the Soviet Union was before it disintegrated. The USSR covered some 22.4 million square kilometres (sq km). At the time that it broke up in December 1991, the population was approximately 300 million. This gave it a ratio of roughly 13.4 people per sq km. Russia now covers an area of about 17.1 million sq km, and its population is less than half of the last Soviet population at around 135 million inhabitants. This means that the ratio of people per sq km has fallen to just 7.9.

To put those figures in context: the USA has a territory of 9.8 million sq km and a population of 325 million, giving it 33 people per sq km. The United Kingdom covers just 242,500 sq km, with a population of 65 million, giving it the much higher ratio of 268.5 people per sq km. Despite this, the people of Britain do not all live on top of one another. Only seven per cent of the UK is urban; and just over half of that urban territory is taken up with green space, such as parks, gardens and sports fields.

So if a country as densely populated as the UK still has so much open space, how much more there is in Russia. You could travel for days in Siberia and not see another living soul. Of course, much of the territory in the north and east of Russia is not just uninhabited; it is uninhabitable. Yakutia – or Sakha in the local language – is the single biggest subject of the Russian Federation (subject being the designation for the territorial divisions). Yakutia covers a territory the size of India. Its population, though, is just one thousandth of the population of that country; 97 per cent of the territory of Yakutia is uninhabitable.

This means that for a country of such huge size, Russia has a serious demographic problem. Even with a large army it is impossible to maintain the kind of watertight guard on the country’s borders which many Russians might consider necessary to keep out potential foreign invaders. In more realistic, day-to-day situations, there are serious manpower problems in various parts of the country. Moscow and St Petersburg may be among the biggest cities in Europe, and there are thirteen other cities in Russia with a population of over one million inhabitants; but the countryside has been devastated by the exodus of the young in particular. Travellers’ tales are rife of villages where people are slowly killing themselves by simply drinking all day, because there is nothing to do and no young people to come up with any inspiration.

At the start of the twentieth century, though, and despite the harsh conditions, the population was rapidly expanding, as H M Grove observed:

The population of European Russia is increasing at the rate of about 1,500,000 per annum; and this tremendous increase is merely the survival of the fittest. The rate of infant mortality in Moscow is 30 per cent; in the North of Russia it is more like 70 per cent.
(Grove in Dobson, Grove, Stewart, p.257; 1913)

And to this day, when you see the peasant population, you see the effect which these conditions have had on people.

Where we halted [on the Trans-Siberian Express], I would now find the indigenous Siberian travellers, the aborigines as a Russian official called them, appearing in growing numbers. I would find the shop, restaurant and waiting-rooms full of women in shawls, dark dusty skirts and woollen jumpers, and men with beards dressed in blouses, faded blue trousers tucked into mud-stained boots and forage caps on their heads. The faces of both men and women were stained, creased and marked by sun, wind and frost, and they sat, as a rule, silently eating or waiting, their bundles beside them.
(van der Post, p.215; 1965)

…few would dispute that the peasants are as a rule improvident, untruthful and obstinate in persevering in error; that they lack resolution, independence and initiative; that they possess an insatiate capacity for receiving, while their gratitude is not commensurate.
(Stewart in Dobson, Grove, Stewart, p.307; 1913)

The people [in Siberia] seemed freer, more independent and with more initiative than any Russians I had yet met. They tended to take the State less seriously and tragically. Moscow was not only some thousands of miles away but their instinct was to suspect authority and to rely on their own judgement and capacity for helping themselves. They were impulsive, rather reckless, open, quick-tempered and unbelievably generous.
(van der Post, p.234; 1965)

The attitude to the State and suspicion of authority of which Laurens van der Post writes is summed up by the old Russian saying, “До Бога высоко, до царя далеко” (Do Boga vysoko, do tsarya daleko, “God’s a long way up and the Tsar is far away”), which suggests not only that you must learn to look after yourself, but has the implied meaning also that the local leader – be he appointed by the Tsar or by the Communist Party or now by the President – acts as a mini-Tsar in his particular fiefdom. Life for the Russian who lives outside the big cities is still especially tough.

On a different note, David Willis makes an interesting observation which many of us believed and which has now been demonstrated: that were the Russians given freedom to travel abroad, a right which they didn’t have in Soviet times, many would go; see; and return.

Given the chance to go abroad to live, the majority would go to see the world for themselves, and then would return to home and family and the country they know best… Many of the Rising Class are disillusioned with Marxist ideology, but not to the point of taking the momentous step to leave their country, families, and friends forever.
(Willis, p.50; 1985)

Sentiments expressed in a number of quotations in Chapter 1, Mother Russia, support this idea. What a pity that the Communist Party of the Soviet Union never saw fit to try out the theory. It might have led to greater understanding and a thawing of the Cold War earlier than it actually happened.

In fact, even with the right to travel, most Russians still stay at home or take their holidays either at their dacha or at resorts in Russia. According to official statistics from the Federal Migration Service, only 20 per cent of Russians have been abroad – including to other former countries of the USSR – only 15 per cent hold a passport; and of those only about half that number use their passport regularly.

Of course, factors other than a simple desire to travel play a part here. A higher percentage of younger Russians travel abroad; among the older generation there are still those who believe that with its diverse geography there is no need to travel outside Russia to see something different from what they experience every day where they live. Economic reasons are important, too. Foreign travel dipped dramatically after the crash of the rouble in August 1998. The government defaulted on its foreign debt repayments, and virtually overnight the currency fell to about a quarter of its previous value. And although as the twenty-first century progressed life became more prosperous for many citizens and the numbers of people indulging in foreign travel rose again, the seizure of Crimea and invasion of Eastern Ukraine – and the subsequent Western sanctions – hit people’s pockets once again. Furthermore, to try to boost tourism to Crimea in particular, in 2014 a regulation was introduced forbidding civil servants from taking their holidays abroad.

For those who can still travel abroad, though, another hurdle to be tackled is the need to obtain a visa to travel to many countries. Visas for many Russians are readily available. But the forms that have to be filled in can be difficult. For example, to apply for a British visa a Russian must fill in a multi-page form (depending on the answers it can grow and grow), and it has to be filled in in English. The cost of obtaining a visa can add significantly to the cost of a holiday, too. Not only is there the cost of the actual visa itself, unless you live in a major city you may well have to pay the equivalent of hundreds of pounds to travel to the nearest visa centre to give your fingerprints, and possibly arrange an overnight stay.

There are those Russians who spend much time abroad, own property and have their children educated in foreign schools. But as a percentage of the total population they represent a tiny minority.

Soviet guides used to enjoy saying to foreign tourists who suggested that Party members led a privileged life, “yes, we have privileged people in the USSR – children!” And Hedrick Smith explains well why this is so.

At heart, Russians are soft on children. The common rationale, which I have heard from officials again and again, is that children must be given privileged treatment “because they are our future”. The real reason, I suspect, is more emotional. Russians are moved by sentimentality to dote on children: They envy and fancy the innocence of childhood…
A Russian engineer, a father of three, called it “a kind of Jewish spoiling – we fear for our children, that they won’t be healthy, they’ll go off to the Army, that some misfortune will befall them – because we have seen so many hardships ourselves.”
(Smith, The Russians, pp.190-193; 1977)

There were, of course, other privileged people in the Soviet Union, such as the pseudo-intellectuals referred to by Kaiser in the previous Chapter, in The Peasantry versus the Intelligentsia. But the guides could look you straight in the eye and deny that; just one reason why Chapter 10 is called Lies.