…if you have an object in view in Russia, you can always attain to it, however impossible it may appear, by the help of the rouble.
(Joubert, p.139; 1904)

If Russians have earned a reputation over many years for telling lies, they have also become infamous for corruption; the two often go hand-in-hand. When you ask Russians about this you tend to get one of two reactions. Either they shrug their shoulders and wonder why you’re even asking about it, so “normal” do they consider it; or they start to get defensive and say, “Well, what about in your country…” (This reaction is so common that it is frequently referred to as “Whataboutism”.) Yes, you will come across instances of corruption in any country; but this neither makes it right, nor can the situation in most Western countries be compared to the endemic corruption in Russia, where it spreads from the very top of society down to the simplest level.

In August 2015, Vladimir Putin’s Press Secretary, Dmitry Peskov, hit the headlines twice in a matter of days amid corruption allegations. First, at his wedding, photographs showed him wearing an exclusive Richard Mille watch, one of only 30 made, and which sells for £400,000. He claimed it was a present from his wife, a former figure-skater. Next, he went on holiday in the Mediterranean with his new wife and a few friends on board a luxury yacht which costs £275,000 a week to rent. Apparently Peskov has rich and generous friends.

Most of the quotations in this chapter come from Carl Joubert’s Russia As It Really Is (1904), and Peter Pomerantsev’s Nothing is True and Everything is Possible (2015), what I describe as the two “bookends” of this collection. I have deliberately mixed them in together to show how on the issue of corruption little has changed in Russia over the last century. Joubert’s first quotation sums up the situation as he had experienced it living in Russia for nine years at the end of the nineteenth century: 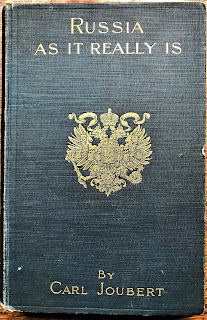 From the Baltic to the Yenisei the whole country is corrupt…every man has his price, and is anxious to be offered it.
(Joubert, p.27; 1904)

And his second will sound very familiar to anyone who has come up against obstructive and apparently uncooperative Russian officials, either in Soviet times or since.

At the Russian frontier the spirit of the country in which I had spent so many years of my life came back to me. The official who inspected my passport found a five-rouble note pinned to the back of it; and, in consequence, my luggage was passed through the custom house unopened, and I was allowed to proceed on my journey unmolested.
(Joubert, p.141; 1904)

A modern version of this which Joubert would recognise is the traffic police. Russian traffic police can stop any vehicle without reason. If a driver has not committed an offence and their documents (driving licence, ownership certificate of the car, insurance) are all in order, they may not give any bribe. But if they were speeding, crossed a white line or have committed any other minor offence which has not endangered other road users, they will probably slip some roubles in with their documents to ease the procedure. A few years ago it was announced that there was to be a crackdown on this practice; after a short time things returned to “normal”.

Another modern version of what Joubert found at the Customs Post concerns dealings with the tax police. Pomerantsev, whose nine years in Russia were spent at the start of the twenty-first century, found that they, too, wanted their cut. 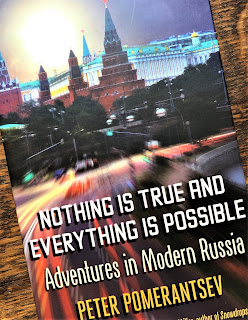 …no one thought taxes would ever be spent on schools or roads. And the tax police were much happier taking bribes than going to the trouble of stealing money that had been paid in the orthodox fashion.
(Pomerantsev, p.53; 2015)

The very term “tax police” may sound harmless enough in English, but the methods this arm of the law employs are frequently tough. Armed men in balaclava helmets bursting into offices ransacking files and taking away computers and documents is a usual practice.

But even corrupt officials can be sensitive souls. And the word “bribe” can sound very ugly. Pomerantsev suggests that there are ways to make the procedure more polite.

Paying bribes requires a degree of delicacy. Russians have more words for “bribe” than Eskimos do for “snow”. I use my favourite formulation: “May I use this opportunity to show a sign of my respect for you?”
(Pomerantsev, p.151; 2015)

Sadly, Joubert’s comment about the police and their distortion of the truth is still true more than a hundred years after he was writing.

…whereas the departure from the truth on the part of the police of other countries is deplored, in Russia it is the normal tendency.
(Joubert, p.26; 1904)

In 2012, during protests about allegedly rigged elections, riot police waded into protesters – then some of the protesters were charged with “assaulting the police” and sentenced to up to three and a half years in prison.

In his novel, Metro, published in 1986, Alexander Kaletski makes a valid point about payment in “bottles”.

A long time ago in the Soviet Union, the monetary unit was devalued to bottles; one bottle equalled 3.12 roubles. The conductors know that the legal way to travel is to buy a ticket at the station for two bottles. But if a passenger pays them personally with one bottle, it may be illegal, but it’s much better for them and the passenger.
(Kaletski, p.8; 1986)

This usually refers to vodka, but in some cases it may be more specific. I discovered this “currency” for myself as a student in Kiev in 1979. I agreed to pick up my room-mate’s television from the repair shop. I knew that he had done a deal to have it fixed quickly. “We agreed on the cognac,” the TV repair man told me. Seeing my blank look, he was forced to tell me that, as I hadn’t actually brought a bottle, I had to give him eight roubles, instead of the usual four. (For greater clarification as to why “the bottle” has become a unit of currency, see Chapter 20, Drink.)

A rouble on either eye and a rouble across the mouth will effectually prevent the Russian official from seeing or speaking.
(Joubert, p.79; 1904)

There are…so many ways the system wraps itself around you. My latest has been a driving test. I would never pass, my instructor had explained, if I didn’t pay a bribe…I protested that I wanted to learn and pass the test for real. He explained the traffic police would fail me until I paid up.
(Pomerantsev, p.138; 2015)

The strategy of cheerleading in public and lining pockets in private came naturally to these people.
(Harrison, p.117; 2016)

As with so many aspects of life in Russia, corruption becomes a target for humour. A joke which became popular in the 1990s, when people obtained and grew businesses in often dubious circumstances concerned two oligarchs who had decided to fight things out in court:

The night before a court case between two oligarchs in Russia in the 1990s, one of the oligarchs visited the judge and saying, ‘Good luck for tomorrow, I just wanted to let you know that I believe you will make the right decision’, left an envelope on the judge’s desk. When the judge opened it, he saw that it contained a million dollars in cash.

As he was wondering what to do about this, the judge heard a knock at the door. Opening it, he saw the other oligarch standing there. As he shook the judge’s hand, wishing him well for the next day, he slipped an envelope into the judge’s pocket. After the man had left, the judge opened the envelope to find it contained one and a half million dollars.

The judge passed a sleepless night wondering what to do to ensure a fair trial. As dawn broke, the solution came to him. He dashed off to see the second oligarch and returned half a million dollars to him.

Those who succeeded in business at this time – frequently having obtained the assets of their businesses by bribing a state official to sign papers over to them – thought up ingenious ways to justify their new-found wealth. The first time I interviewed Boris Berezovsky in 2001, he started to complain about how under Putin the state ‘had stolen’ his businesses from him. When I asked him how he had obtained these businesses in the first place, he replied (with a look of wide-eyed innocence),

When I did my early business dealings in Russia, old Soviet laws no longer applied and new Russian laws had not been brought in  - so I did not break the law!

When Russia was awarded the 2018 Football World Cup there were plenty of mutterings about corrupt practices (as there were when at the same meeting of FIFA officials the 2022 World Cup was given to Qatar). I have seen no hard evidence that this was the case; but I do know of one English businessman who went for a meeting with a Russian official involved with staging the World Cup in Russia who was told before the meeting started that if he wanted to play a part then he should transfer some money to a particular bank account.

As for the creation of the infrastructure for such events, Pomerantsev’s comment on unnecessary hyper-projects for those whom the Kremlin wishes to reward –

– brings back memories of the Sochi Winter Olympic Games in early 2014. Certain wealthy Russians (notably those who became oligarchs in the 1990’s, influencing politics as well as running vast businesses until Putin reined in their political activity) were ordered by the Kremlin to build various parts of the infrastructure for the Games. The estimated cost of the Sochi Olympics was $50 billion; yet only half of this was actually spent on the infrastructure for the Games, which suggests that these wealthy patrons were well rewarded for their 'loyalty'.

Pomerantsev’s final comment indicates how precarious the situation is for many Russian businesses still in Putin’s Russia.

The near mythical Russian middle class, suddenly finding it has no real rights at all over its property, can be thrown out and relocated like serfs under a federal whim.
(Pomerantsev, p.129; 2015)