The slavery of ancient Egypt, which produced the pyramids, could not have been worse than that which produced St Petersburg. The whole of Russia was compelled to take part in the making of it, and it has been estimated that over 100,000 persons perished in course of the operations.
(Dobson in Dobson, Grove, Stewart, p.68; 1913)

Perhaps there is no better example of the extremism of the Russian character (as discussed in Geography, above) than the building of St Petersburg. On the one hand, Peter the Great deserved praise for wanting to bring Russia closer to Europe; but both the marshy site which he chose and the way he ignored the cost in human life in order to build it show vividly that extremism.

Even the site of the city was unbelievably pitched in some of the worst marshland in the north-west of the country as if there deliberately to demonstrate Russian disdain of cost and their expertise in the art of the impossible.
(van der Post, p.276; 1965)

[Peter the Great] commanded that no stone buildings should be erected in any part of the Russian Empire outside of St Petersburg under penalty of banishment to Siberia and confiscation of property. Is it surprising if, after this, the Russian interior continued to be built of wood?
(Dobson in Dobson, Grove, Stewart, pp.70-71; 1913)

And being situated on the edge of the Russian Empire, communication with Peter’s new capital also proved a problem.

…as regards land communication, St Petersburg is situated at the most inconvenient and outlandish end of Russia that could possibly have been chosen for it… It may not be a matter of much consequence today, in view of the prospects of racing motors and our contempt for distance, and still less will it be so probably in the near future, when the airship comes into general use; but one cannot help thinking that, had the Russian capital been placed in a somewhat more accessible position, it would have been better for the outside world as well as for Russia.
(Dobson in Dobson, Grove, Stewart, p.6; 1913)

It is wonderful to think of St Petersburg being connected to the rest of Russia – and perhaps the world – by airship. Nevertheless, despite the inconvenient location, the marshland and the problem of communication, the city grew rapidly. In 1913, G Dobson wrote:

Already by 1909 St Petersburg was the fifth largest city in Europe by population, behind London, Paris, Berlin and Vienna. A little over 100 years later, even though it is no longer the capital of Russia, St Petersburg has risen to be the third largest city in Europe by population; only Moscow and London have larger populations. (Istanbul’s population is possibly even bigger than Moscow’s, but the city is divided between Europe and Asia.) Now the population of St Petersburg is around the five million mark, despite an estimated one and a half million deaths during the siege by the German Army from September 1941 to January 1944. In terms of territory St Petersburg was until recently Russia’s biggest city, bigger even than Moscow; but the city boundary of Moscow has been extended to incorporate territory which was part of the Moscow Region, taking it past St Petersburg in territory as well as population.

By the early twentieth century it was not just by size that St Petersburg was one of the leading cities in Europe, as Laura Claridge points out.

By 1910, St Petersburg had become a thirty-five-square-mile city of enviable high style and culture, blending a new commercial vigour with the older court traditions of wealth and indulgence… An illusion of unlimited prosperity was created by the stores overflowing with “oysters from Paris, lobsters from Ostend, flowers from Nice” and, on Nevsky Prospect, a shop where, according to Vladimir Nabokov, one could revel in English “fruitcakes, smelling salts, Pears soaps, playing cards, picture puzzles, striped blazers, talcum-white tennis balls, and football jerseys in the colours of Cambridge and Oxford.”
(Claridge, p.35; 2010)

St Petersburg, “the city that ordered its champagne by the magnum, never by the quart,” was an endless round of parties.
(Claridge, p.43; 2010)

Despite the struggle he had had to get there, Dobson agreed that, in terms of society, the city was a place to see and be seen.

The general coup d’oeil of St Petersburg is certainly a magnificent one when you get there, but it cannot be said that the city is located in the midst of a rich and prosperous-looking part of Russia.
(Dobson in Dobson, Grove, Stewart, p.14; 1913)

The city also earned a reputation as a centre of culture and learning.

Fortunately there was another side to the history of the City of Peter. It had a serious purpose to its foundation despite the excess with which it was perpetuated. Both good and bad in the European spirit was funnelled through it into the vast hinterland with prodigality. Science, philosophy, education, the arts and skills of Western Europe found an enduring home there.
(van der Post, p.280; 1965)

Perhaps all of this also gave the gentry in the city a “let them eat cake” attitude to what was going on around them at the time of the First World War?

…almost until the moment the Bolsheviks secured control of the government in October 1917, Petrograd seemed to be much the same as it had ever been, with its Alexandrian culture of salons filled with patrons of the arts, cultural gathering places of both decadent and avant-garde talents. Shortages of food, the devaluing of the ruble, the shootings that occurred more and more often in Nevsky Prospect; the wealthy classes felt these were aberrations, merely the overflow of tensions from the war against Germany.
(Claridge, p.55; 2010)

As Dobson points out the city was not universally popular:

It is curious that…the Muscovite Slavophile and the English Russophobe unconsciously joined hands in reviling it from very different motives. The one disliked it because it stood for everything foreign, and did not represent the real Russia; the other abused it because it represented Autocratic Russia and the supposed enemy of British rule in India.
(Dobson in Dobson, Grove, Stewart, pp.86-87; 1913)

Just over 60 years later when I first visited Leningrad I had the reaction of “the English Russophobe”; though not because “it represented Autocratic Russia and the supposed enemy of British rule in India”, but for one of the reasons Dobson gives for the dislike of St Petersburg by the Muscovite Slavophile: for me the city did not and still does not, represent the real Russia. Perhaps now, too, it is that the pace of life in St Petersburg is much slower and more lackadaisical than in Moscow; and in terms of pace, Moscow is similar to London. On one visit I received a phone call from a St Petersburg taxi firm half an hour before I was due to catch the night train to Moscow to say that they didn’t have any cars available, so they wouldn’t be able to fulfil the order which had been placed two days previously. When I complained, they replied simply, “Oh, well, it happens.” I would not expect a taxi firm in Moscow to do that.

St Petersburg quickly developed a reputation as an unhealthy place, too, which was perhaps hardly surprising, given that it was built on a bog.

No other capital city in the world has ever been criticized as much as St Petersburg. Russians themselves have always complained of its defects, and not without good reason. Foreigners also have given it a bad reputation, and its ruin has often been predicted…In spite of all its external splendour, it has come to be known as the unhealthiest and most expensive capital in Europe.
(Dobson in Dobson, Grove, Stewart, p.84; 1913)

St Petersburg is probably the only city in Europe, or perhaps in the world, where danger signals in the form of placards with glaring red letters are posted up on house fronts, inside tramcars, and in most places of public resort, warning all and sundry against drinking raw water.
(Dobson in Dobson, Grove, Stewart, p.110; 1913)

When I first visited there were also danger warnings on buildings on Nevsky Prospect, the main thoroughfare. These did not warn about the state of the water, but said that one side of the street was more dangerous when the city was under artillery bombardment during the siege in World War Two.

As all this shows, St Petersburg has been mired in controversy ever since it was founded by Peter the Great in 1703. The location, the way in which it was built, the health issue have all led to heated arguments about its worth. But that is not all. Even the very name of the place – in each of its incarnations – has caused controversy.

Some enthusiasts of that time [the reign of Alexander III, 1881-1894], who were in favour of reRussianizing Russia, even went so far as to send their letters through the post addressed to “Petrograd” instead of St Petersburg, grad or gorod being the Slavonic word for town or the German burg. The German names which Peter the Great was so fond of giving to everything were always an eyesore to the old-world Russian, and are not altogether pleasing to the Russian patriot of today.
(Dobson in Dobson, Grove, Stewart, p.22; 1913)

Peter the Great insisted that he was naming the city in honour of his patron saint, not himself; but in opening what he described as “a window on Europe” he chose to give the city a German-sounding name. This was also an indication that from the time of Peter onwards, Russian was considered the language of the peasantry, and the language of the court was at one time German, at another, French. But as Dobson points out, with the rise of the Slavophiles in the latter half of the nineteenth century, a movement was started to russify the name. The outbreak of war against Germany in 1914 gave the Slavophiles the perfect excuse to change the name of St Petersburg to the Russian, “Petrograd”.

But the name lasted for just ten years. Wanting to wipe the Tsarist past from the popular consciousness, the Bolsheviks renamed thousands of cities, towns, streets, squares; indeed, anything with a name too redolent of Tsarist times.

(Even the city of Tsaritsyn was renamed, despite the fact that it had nothing to do with the word “tsar”. For the etymology of the word, see below, Chapter 9, Language. In 1925 the city became Stalingrad, and in 1961, under the policy of de-Stalinisation, it was renamed once more, to Volgograd. A law passed in recent years allows the city to be called “Stalingrad” on certain days of the year, to celebrate the heroic defence of the city when the German Army was repelled in 1943.) 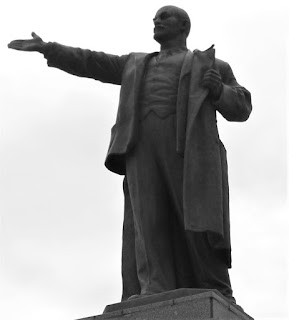 In 1924, “according to the will of the people”, as the official version had it, Petrograd was given the name of the leader of the Bolshevik Revolution: it became Leningrad. In 1991, after the collapse of the so-called coup in August, the original name of St Petersburg was restored. When I asked the then Mayor of the city, Anatoly Sobchak, in October of the same year whether this hadn’t been too hasty a move at a time of economic crisis in the country, given the cost of changing everything from government notepaper to maps, to signs, he was insistent that this was what the people of the city wanted – as perhaps this Soviet joke indicates: