Book Review: 'The Return of the Russian Leviathan' by Sergei Medvedev

The Kremlin would like us to believe that the Russian people are solidly behind President Vladimir Putin. Their claims for support for Putin are reminiscent of Soviet days, when we were frequently told that 99% of the electorate would take part in elections, and 97% would vote for Communist Party candidates. But as mass demonstrations showed this summer, there is discontent among Russians that their living standards are falling while taxes rise and those running the country become increasingly wealthy. A new book by the historian, Sergei Medvedev, reveals much of the truth behind Putin’s Russia. 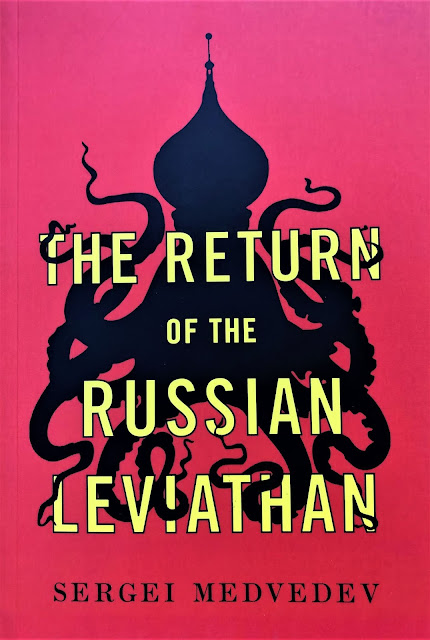 I must start by making a declaration: I translated The Return of the Russian Leviathan from Russian. But this means that I know the text better than anyone except the author! And as someone who has spent his life studying and working with Russia I believe this is the most perceptive assessment I have read by a Russian of what is happening in Russia.

Sergei Medvedev is a highly astute observer of his own country. The title of the Russian original is Парк Крымского Периода (Park of the Crimean Period or Crimassic Park, as the author originally planned to call the English version). The title is a play on Jurassic Park, and suggests Medvedev’s summary of post-Soviet Russian history: this divides into two periods – before the seizure by Russia of Crimea from Ukraine in 2014, and what has happened subsequently. The book is a collection of essays which span this event, as Medvedev wrote throughout Vladimir Putin’s third term as Russian President, from 2012 to 2018.

Using the militarised language of the Putin regime, Medvedev divides his account into four ‘wars’ being waged by the Kremlin: the War for Space (in the sense of territory, not the Solar System); the War for Symbols; the War for the Body; and the War for Memory. With these four divisions, he carefully dissects what the modern Russian state is trying to do.

‘The War for Space’ makes great use of a term constantly pushed by Putin: ‘sovereignty’. Since the book went to the publishers another use of the term has arisen, with Russia creating what Putin terms its ‘sovereign internet’, an internet which will be separate from international servers. The state says that this is to protect Russia from a major cyber-attack; most observers see it as an attempt to create a system which would, at the whim of the Kremlin, cut Russians off from the liberalising influences of the West.

The opening chapter, ‘Sovereign Territory…With No Roads’ sets the scene of how the state’s idea of ‘sovereignty’ is simply a kind of avarice. A main road to the West from Moscow disappears in a sea of mud; the Russian countryside is dying; land is pointlessly burnt. But it doesn’t matter if the land becomes useless for agriculture or habitation: it is sovereign Russian territory! This is a theme which continues throughout this section, including highlighting the destruction caused in Crimea and Eastern Ukraine to make those areas sovereign Russian territory; useless territory but ‘ours’.

‘The War for Symbols’ highlights the abuses of power by the elite. People die in terrible car crashes on the road out of Moscow to the dachas of the elite, because no provision is made to slow down the traffic. The elite can travel as fast as they like to their hideaways, meaning that at night the boy racers can do the same on that stretch of road, often with fatal consequences for innocent drivers who are hit by them. A friend of Putin’s openly flies his dogs around in a private ‘plane; Russia steps up production of tanks and missiles as symbols of its military might (despite the fact that modern weaponry has become much more sophisticated); Russian football hooligans are praised by members of the State Duma when they violently cause havoc at the European Championships. And this is all considered as a good way for Russia to show that it matters on the world stage?

As if the Kremlin under Putin didn’t already control people’s lives in a way which underlines the role of the state, in ‘The War for the Body’ Medvedev describes how his regime is now trying to go further than before in dictating people’s lives, reaching into the kitchen and the bedroom. The author is especially scathing about Russia’s repressive and outdated attitude to homosexuality; and the way in which the state fails to protect its womenfolk from domestic abuse. And he villifies the state for destroying Western food products at a time when poverty levels in the country are rising. He also gives a fascinating explanation as to why a piece of French cheese can help make Russians feel that they are a part of the modern world (and thus is anathema to Putin); and why Russia doesn’t have its own history of cheese production!

In the final section, ‘The War for Memory’, Medvedev points out that the state has hijacked true popular reasons for celebration, such as Victory Day, the commemoration of the end of World War Two, by making it a ‘state’ celebration (and making a mess of that, too). He also allows himself to slip into fiction, using stories about the Golden Horde, the Decembrists and Stalin’s secret police, the NKVD, to illustrate the absurdity of Russia’s ruling elite – and the danger that current policies present not only to Russia’s standing in the world but to the Russian people themselves.

This book was a pleasure to translate, not only because of its vibrant language but because it presents such a vivid picture of what is really happening in Russia under Vladimir Putin. I cannot recommend it too highly to anyone who wants to know more about modern Russia (and I am not on commission, so do not benefit from sales!)

The Return of the Russian Leviathan by Sergei Medvedev (Translated by Stephen Dalziel) is published by Polity Press, Cambridge, UK.