From the brief description of Komarov’s tragic death and the film of Leonov’s spacewalk, we pass through a flimsy curtain which acts as a reminder that at the same time as the Soviet Space programme was opening new horizons, the Americans were desperately trying to catch up. And in this one acknowledgement of the US programme we see that, despite all the Russian Space “firsts”, the Americans achieved the one which grabbed the biggest headlines: first man on the Moon; indeed, first man to set foot on another planet.

On a television set from the 1960’s, we see firstly President Kennedy announcing in 1961 that by the end of the decade the USA would put a man on the Moon; then we cut to the launch of Apollo 11 and we see the lunar lander approaching the Moon’s surface. Next, Neil Armstrong steps onto the surface of the planet, with the immortal words, “This is one small step for Man; one giant leap for Mankind.” The film clip ends with the truly iconic first shot of the Earth taken from the Moon.

Passing on there is the largest object in the Exhibition; along with Vostok-6 and Voskhod-1 it is the most stunning artefact on display: the Soviet lunar lander, LK. Although it was never used, it speaks volumes about the ingenuity of the Soviet engineers and designers. It also tells us much about the secrecy of the Soviet system. Although the USSR was trying to put a man on the Moon in the late 1960’s, at the same time as the Americans succeeded, they admitted only in 1989, under Mikhail Gorbachev’s policy of glasnost (openness), that they had been trying to do this. When the Curator came across the Lunar Lander in the Moscow Aviation Institute, it was still classified as Top Secret. It speaks volumes about the worldwide reputation of the Science Museum that LK and the document establishing the long-range rocket programme were both declassified so that they could be exhibited in London.

(Other examples of this secrecy – often bordering on paranoia – were the lack of an announcement about either the launch of Sputnik-1 or of Yury Gagarin; and also that when Valentina Tereshkova flew in Space for three days in 1963 the Soviet Union had come up with the world’s first disposable nappy. But whereas the American Space programme had a huge number of spin-offs for the civilian economy, the Soviet programme, being under the auspices of the military kept its secrets to itself. Instead of taking what would have been the capitalist approach of making the invention of the nappy commercial (and turning its designers in the process into millionaires) Tereshkova’s nappy was classified “Top Secret”.)

So important is the Soviet lunar lander, and thus, such a coup for the Museum to be able to display it, that one Japanese scientist came to London from Japan specially to see the lander. He sat in front of it for six hours, studying and sketching every detail. An American who works for NASA and whom I showed around the Exhibition had come from the States also not just to see the Exhibition but particularly to see for himself the lunar lander.

Had the lander been used, it was to be a one-man craft, in which Aleksei Leonov would have stepped onto the Moon. He would have climbed out of the blue hatch on the side (visible in the top picture) and down a simple extending ladder onto the Moon’s surface. After some 20 minutes gathering samples of rocks, and possibly taking supplies from the unmanned lunar rover which had been sent on ahead and an example of which stands next to the lander in the Exhibition, Leonov would have climbed back on board, blasting off to negotiate a manual docking with the capsule orbiting the Moon.

A major difference between the American Apollo craft and the Soviet Soyuz craft at this point was that, unlike Apollo, the Soyuz had no hatch in the docking mechanism. So after docking with the orbiting capsule, Leonov would have had to leave the lunar module through the blue hatch and climb up the outside before entering the capsule through an air-lock similar to the one from which he exited Voskhod-2 when he made the first spacewalk. 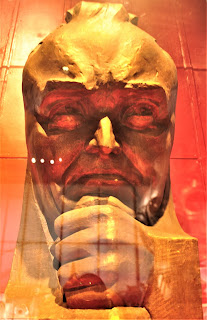 So why did the mission not take place? There are three reasons. Firstly, Sergei Korolev had died in 1966. A large bust of a pensive Korolev sits opposite the lunar lander and rover (right). Korolev was such a driving force behind the Space programme that it was very difficult to take his place. Vasily Mishin, who took over, simply did not have Korolev’s authority, and a series of disputes arose which upset the programme.

Secondly, the payload for the lunar mission – with the lunar lander and the orbiting capsule – was to be the heaviest payload that the Soviet Union had yet sent into Space (the lunar lander itself weighs over three tons). With its 20 engines, the Vostok rocket which had been used since Gagarin’s launch, and a variation of which is still used today, would not have been sufficiently powerful to take this load into Space.

A prototype of a new rocket, the N-1, with 36 engines, was designed. There is a line drawing of it on the wall behind the lunar lander (Left). The N-1 was tested twice, but on each occasion it blew up with a massive explosion. It was a case, quite literally, of going back to the drawing board.

Finally, of course, after the Americans won the race to the Moon the urgency for the Soviet Union to do this vanished. The Russians had had so many “firsts” in Space, that to be second to the Moon would be considered a defeat. Research continued until 1974, but was then abandoned and Soviet Space efforts were concentrated on creating Space Stations, the first of which, Salyut-1, had been put into orbit in 1971.

The story of how the lunar lander came to be in the Exhibition raised many an eyebrow and a smile. The Curator came across it in an enormous hangar in the Moscow Aviation Institute. His immediate thought was that this would make an amazing centrepiece for the Exhibition, although he realised that there would be certain logistical challenges in bringing it to the Museum and installing it in the area which had long been designated for the Exhibition.

With this in mind, among his first questions were, how heavy is it and how tall is it? The height of just over five metres was easy enough to determine, and that it could be displayed with the legs not fully extended, so it would fit under the ceiling in the exhibition area. But no-one knew the weight – or the answer to the next question: how does it come apart? The machine had stood where it was since 1974, when Mishin moved to the Moscow Aviation Institute and metaphorically slipped the lunar lander under his coat and took it with him, afraid that if left where it was it might be broken up.

A retired engineer was found who had worked on the lander. He was able to tell them its weight, and that it could be dismantled into four parts: the docking mechanism at the top; the capsule below it; the engine block; and the cradle and legs, which would have stayed on the Moon.

Perfect. Now to get it out of the hangar. The first problem there was that the huge hangar door had not been opened for many years, and was rusted shut. Added to which, a tree had grown at an angle across the door on the outside. The door was freed, the tree chopped down, and a new roadway laid to take the weight of the cargo.

But the Curator saw one more logistical difficulty. Yes, it could now be transported in its four component parts all the way to the back door of the Science Museum; but would they be able to move it from there to the exhibition area? Exhibits such as Stephenson’s Rocket could be moved, but not walls or pillars. The Tesco beach ball, bought to practice wrapping Tereshkova’s capsule for transportation, came into its own again. A trolley was made up and the beach ball taken through the Museum to the area immediately below where the ticket desk for Cosmonauts was to be, where a hydraulic lift system could be installed to lift the lunar lander into place, section by section. When this proved possible, it was all systems go for the lunar lander to be in the Exhibition – indeed, the Exhibition would, effectively, be built around it, as the lander had to be in place before any partitions could be put up.

But there was one final surprise in store when they came to put the lander together on the spot. They hadn’t taken into account the fact that the capsule did not simply sit on the engine block. The engine block was convex, the capsule concave. So the cradle and legs had to be very carefully tipped forward to allow the capsule and docking mechanism to be put on top. The whole process of bringing the lunar lander to London and installing it in the Exhibition had been a massive logistical challenge, but visitors to the Exhibition agreed it was well worthwhile.


Next - Part Seven: Space Stations and Beyond