Sergei Korolev was hidden; his name was not known even in the USSR in his lifetime. It was said that this was to protect him: he could have become a target for capture or murder from foreign intelligence services. But it was also because in the Soviet system praise of individuals was officially frowned upon; this was a society where the collective dominated. 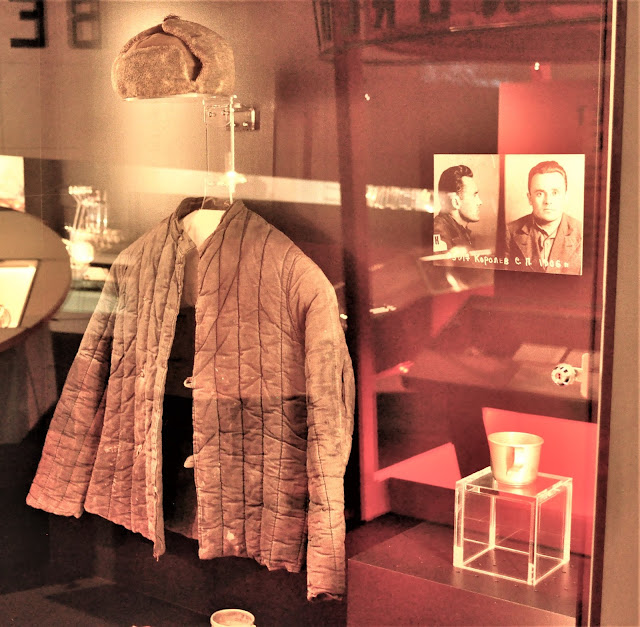 The madness of life in the 1930’s in Stalin’s Soviet Union is revealed in this cabinet which, as well as containing the hat and padded jacket of the type worn by prisoners of Stalin's GULAG, displays the photograph of Korolev taken when he was arrested in 1938 on trumped-up and totally ludicrous charges of “anti-Soviet activity”. As one visitor commented to me, “He looks terrified…as if he expects to be shot.” He was sent to the furthest reaches of the GULAG, Kolyma; the only item he brought back from there was a small metal cup (also displayed). He also brought back physical – but not, it seems mental – scars which marked him for life. His upper and lower jaws were broken in the camp; he lost most of his teeth through scurvy; and he had a long scar on his head. And all this following a false imprisonment. It is remarkable to think that after suffering such treatment, when he returned to Moscow Korolev was still ready to serve his Motherland. Yet millions of Russians did just that when they were finally released from the camps.

(GULAG stand for Glavnoe upravlenie lagerei - the Main Administration of the Camps. Stalin created a huge number of prison camps across the USSR, but especially in some of the more inhospitable areas of Siberia and the Far North. The term became known in English with the publication in the 1970s of Alexander Solzhenitsyn's The GULAG Archipelago. No-one knows, or will ever know, how many millions of innocent Soviet citizens were banished to these camps; or how many millions perished there. All we know - despite the protestations of one ignorant Russian visitor to the Exhibition, who dismissed the camps to me by saying "only [sic] about a million people were sent there" - is that millions died there.)

The cabinet opposite this one contains what, for me, is one of the most fascinating objects in the Exhibition. It is the first and last pages of the nine-page original document setting up the Soviet Long-Range Rocket Programme on 13 May 1946. The fact that it is the original document is fascinating in itself; what’s more, it is a tremendous coup for the Science Museum that it was declassified in 2012, specifically for the Exhibition.

For anyone interested in Soviet history this is a gem. Most strikingly, the document has been signed by Joseph Stalin. His large, almost child-like signature in blue pencil dominates the last page. One Russian visitor said somewhat disparagingly that he hadn’t even bothered to write properly: the letter “t” is written in the lazy fashion, instead of the correct Russian handwritten version which looks like an “m” with a line over the top. Another visitor commented that the way he had written the “S” (“C” in Russian) and the “T” looked as if he was drawing a hammer and sickle.

What I found particularly exciting the first time I saw the document, was that on the first page there is a small but highly significant clue to the climate of fear which was such a feature of Stalin’s Soviet Union. In paragraph 1 there is the list of names of the Communist Party bureaucrats (not the scientists) who would be on the Committee. The list had been neatly typed out; but the top of the list had “т.” for товарищ (comrade) and the designation председатель (Chairman) – but the space for the name had been left blank, for Stalin to fill in. He had written the name of one of his closer associates, Malenkov. No-one would have dared tell Stalin who should be in charge of such an important committee, for fear that they may have ended up in the GULAG. Stalin had to make the decision; and to be seen to be making that decision.

Two of the other names on the list particularly struck me: Dmitry Ustinov, who was Minister for Armaments at the time and became Minister of Defence in 1976 (a post he held until he died in 1984, aged 76); and Ivan Serov, who was appointed as the first head of the re-named security service, the KGB, in 1954. 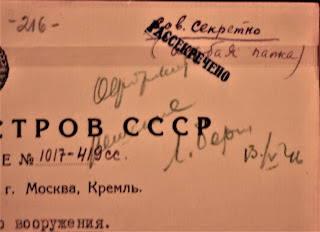 In the top left-hand corner of the document, Stalin had then scribbled his approval (this is difficult to read apart from the first word, За, “For”); and in the top right-hand corner (as seen on the right) in green ink, is a scrawled comment and then the legible signature, “L. Beria”. (Lavrenty Beria was the Head of the Soviet Secret Police and was a ghastly character, being personally responsible for numerous murders and rapes.) Just above this signature, in purple ink, are the words, Cов.секретно (особая папка) – Top Secret (Special File), which underlines the importance of the document. The blue stamp, РАССЕКРЕЧЕНО (DECLASSIFIED) has been put over the top of these words.

Stalin’s change of opinion – from thinking in the 1930’s that people such as Korolev were dangerous intellectuals and therefore engaged in anti-Soviet activity, to realising that they must build rockets for the Motherland – came about because the experience of the Second World War had shown him that rockets were the way ahead, notably for defence. Korolev was thinking about getting into Space, but the delivery mechanism would be similar so he was only too happy to be involved in the programme. The most important rocket at that time was the German V-2, and it was to be with the help (willingly or not) of captured German rocket scientists that the Soviet programme was to be built.