Over the course of six months, I spoke thousands of words about Cosmonauts: Birth of the Space Age. Many of those words were repeated over and over again for visitors who were, on the whole, very interested; and it was hugely rewarding to see some of them clearly infected by my enthusiasm! This essay is based on notes which I wrote just after the Exhibition closed, in an attempt to preserve some of the memories, some of the passion, some of the inspiration. I am, in effect, giving myself a tour of the Exhibition; and in doing so am telling much about the development of the Soviet and Russian Space programme. Welcome to Cosmonauts: Birth of the Space Age! The Exhibition sets out to tell not simply the story of the incredible technological achievements which the Russians achieved in Space, but also the human stories behind these achievements, from the dreams of a hundred years ago, through the incredible feats achieved by those who went into Space – and, indeed, those who made it possible for them to go there.

Most people thought that such an exhibition would be impossible to put on. The Soviet Union was inherently paranoid and secretive; and even today, surely the Russians would be unlikely to agree to sending previously (and, in some cases, still) classified objects to London to be put on public display. But if you don’t ask, you don’t get…and if you do ask, you might just get.

An important moment came in 2011. The fiftieth anniversary of Yury Gagarin’s Space flight saw a number of events taking place in London to mark the occasion, and Gagarin’s daughter, Yelena, who is now in charge of the Kremlin Museums, came here for many of these. The serious conversations began at this point.

To many people’s surprise, there was interest from the Russian side in holding an exhibition. Yes, there was some reluctance (“Gagarin’s medal is made of solid gold; how do we know you won’t send back a cheap replica?” was one concern which was voiced); but a more common response from the scientists and engineers was bafflement. For them, these objects are simply what they work with every day; would people really be interested to look at them in an exhibition? Well…yes!


Thus began a four-year journey involving Science Museum staff in many trips to Russia; problem-solving (one of the talks which accompanied the Exhibition was called, “How do you get a rocket into a museum?”); and bureaucracy. It was all worth it. 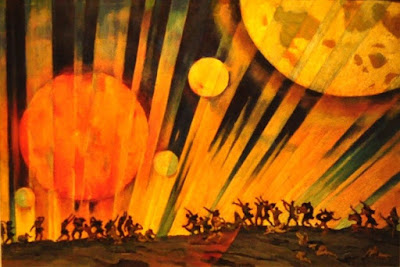 As you walk through the doors of the Exhibition immediately ahead of you is the painting, Red Planet, by Konstantin Yuon, from 1921 (right). This symbolises the excitement, nervousness, even fear which held many in its sway at the time of the Bolshevik Revolution of 1917. There was a real belief that people could create a new world, a fairer, more just place for ordinary folk. Posters shown by Julia Richers in her presentation, The Cosmic Dimension in Early Revolutionary Visual Culture, at the Symposium on 5 February also bore out this idea: the new Russian man (the term “Soviet” did not come into usage until the Soviet Union was declared in 1922) could build not just a new life but a new planet.

This tied in also with the “Cosmist” movement in Russia, which had gained adherents in the late nineteenth century. This brought together ideas of mysticism and spirituality (especially the belief in the Russian Orthodox Church that it was the one true church), and a desire to reach out into the cosmos: man could connect the whole universe.

The philosopher, Nikolay Fedorov, was a great believer in this. He held long and deep discussions with his friend, Konstantin Tsiolkovsky, a teacher of Mathematics at a school In Kaluga, some 120 miles south west of Moscow. Tsiolkovsky began to look at the question from a rational, scientific point of view; and worked out that man would, indeed, be able to travel into space.

Incredibly, a hundred years ago Tsiolkovsky came to the mathematical conclusion that multi-stage rockets would be needed to break out of the Earth’s atmosphere; that in Space there would be weightlessness; men would need to wear spacesuits; they could go for spacewalks (and they would need to go through an air-lock to leave the capsule); and plants could be grown on spaceships. The amazing drawings which Tsiolkovsky made in 1933 to help the Director of the film, Cosmic Journey (Космический рейс), and which illustrate these ideas, form one of the more surprising exhibits. Tsiolkovsky was decades ahead of his time.

Like many geniuses, Tsiolkovsky was an eccentric – albeit a supremely practical one. The enormous ear trumpet which he made to cope with his deafness, and the photograph of him using another one he made, are testimony to this. Indeed, not being a wealthy man he
made all of his own tools which are still displayed in his workshop in his house in Kaluga.
There is a delightful photograph of Tsiolkovsky on the wall of the Exhibition, tugging thoughtfully on his beard; and next to it there is a photograph of the brilliant engineer who brought to fruition the Mathematician’s ideas: Sergei Korolev. Born on 30 December 1906 (according to the pre-Revolutionary Julian Calendar; 12 January 1907 by the Gregorian Calendar), Korolev was destined to be the hidden genius behind the Soviet rocket programme. (An engineering model of a cluster of his fundamental rocket engines, the RD-107, towers over the start of the Exhibition - below.) 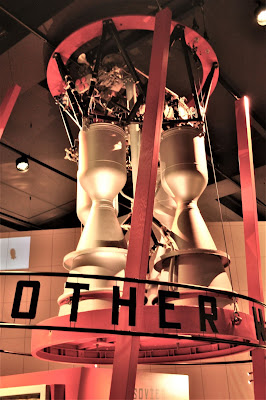