Before we pass into the final room, there is a haunting picture, Sevastianov Family, painted by Oleg Vukolov in 1981, of a Cosmonaut and his family. 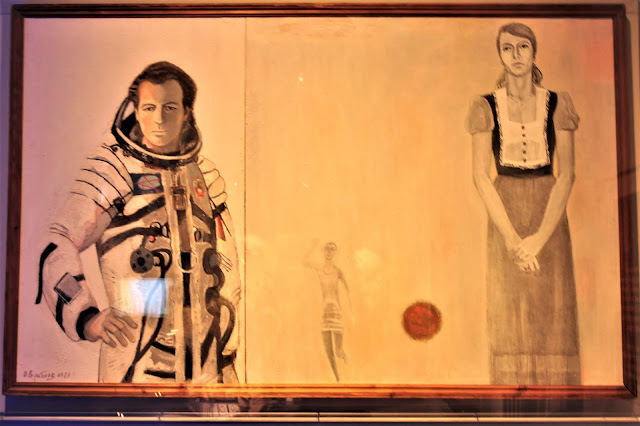 The Cosmonaut in his spacesuit, painted in colour, is on the left of the picture; his wife and daughter (a mere blur) are on the right in black and white. The only colour in this right-hand two-thirds of the picture is Mars, the red planet, in the background. The picture brilliantly sums up so many questions about Space travel and human relations. Cosmonauts make huge sacrifices to go into Space; but often it is their families back on Earth who pay the greatest emotional price.

And so we enter the last part of the Cosmonauts Exhibition. If the exhibits up until now have elicited admiration, amazement and awe at the achievements of these pioneering men and women who are Cosmonauts, engineers and scientists, this room calls for a more emotional reaction. For some visitors, it encapsulates the mystery of Space travel; for others it is a disappointing end to a wonderful exhibition. 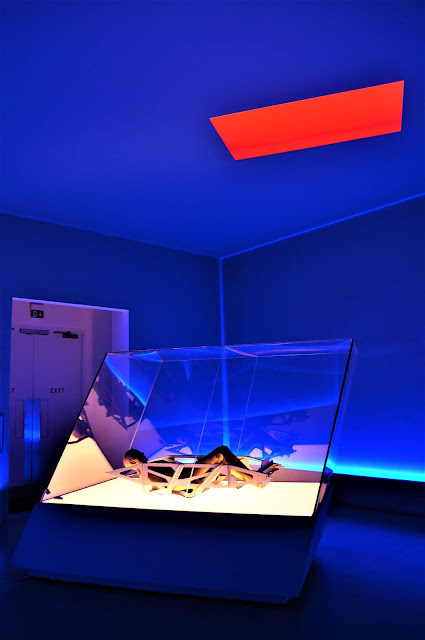 The room is bathed in blue light. There is cosmic music playing, in contrast to the Soviet songs of the 1960’s and ‘seventies which were playing in earlier galleries. There is just one exhibit in the centre of the room, and a quotation from Konstantin Tsiolkovsky on the wall, on the left as you enter. And on the ceiling there is a bright red oblong.

The exhibit, in a large glass case, is a cradle in which lies the figure of a man; when we draw closer we can see that the figure has the face of Yury Gagarin. In the body there are round cavities. The cradle and the figure were sent round the far side of the Moon in 1970, with human tissue in the cavities to see if radiation on the other side of the Moon would have any effect on the tissues. 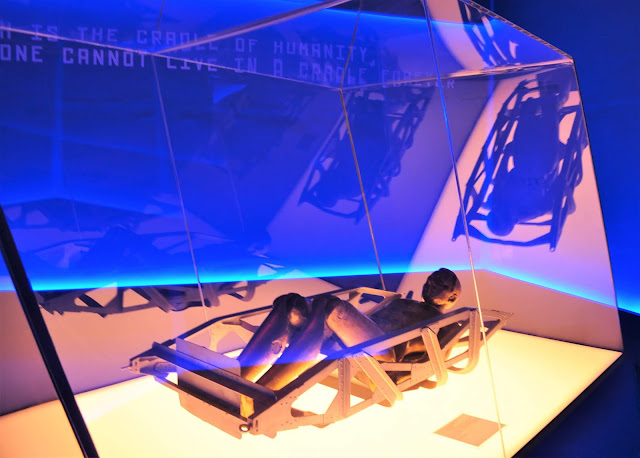 The attention to detail is fascinating, and says something about the mysterious Russian soul. From the point of view of the scientific experiment, a box carrying the tissue would have sufficed; there is no logical reason why the figure had to represent a human being. But emotionally, putting the tissue in a human figure and then giving it the face of Gagarin, who had died two years before, demonstrates that there is still room for human sentiment in the harsh environment of Space exploration.

Furthermore, the cradle in which the Gagarin figure sits ties in with the quotation on the wall: it is Tsiolkovsky’s words from a century ago, when he was first working out the mathematical possibility of spaceflight:

Earth is the Cradle of Humanity, but One Cannot Live in a Cradle Forever

Ending the Exhibition with this quotation brings us back to the beginning. Tsiolkovsky is the Father of Space travel. He it was who first worked out the possibility of breaking free of the Earth’s atmosphere and moving out into the Cosmos. The room is blue; does this represent our own “Blue Planet”? The oblong on the ceiling is bright red; is this a symbol of Mars, “the Red Planet”, which we contemplated with the Mars-500 spacesuit and the painting, Sevastianov Family? Is the oblong a reference to the obelisk which appears at the start of Stanley Kubrick’s film, 2001: A Space Odyssey?

Love it or hate it, the final room in Cosmonauts: Birth of the Space Age leaves the visitor pondering some of the biggest questions facing mankind; the vastness of the Universe and perhaps even the very meaning of life itself.